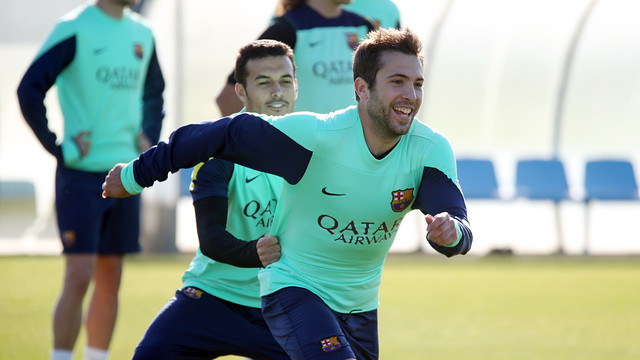 The left back exercised with the rest of his team-mates while Xavi followed a special routine due to a niggle in his right leg soleus muscle. Meanwhile, Iniesta missed training because of a sore hamstring in his left leg

The FC Barcelona first team players trained on Tuesday morning at the Ciutat Esportiva.  The main talking point of the session was the return to group training of Jordi Alba.  The left back has been recovering from a left leg injury suffered during training on 10th October.  This was the first training session following the defeat away to Athletic Club and also the first to prepare for Friday’s Cup clash with Cartagena.  The senior players were joined by Patric and Adama from the reserves.

Meanwhile, Andrés Iniesta was unable to take part in the session due to a sore hamstring in his left leg.  For his part, midfield maestro Xavi followed a special routine due to a sore right leg soleus muscle.

The next training session will be on Wednesday morning at Sant Joan Despí.