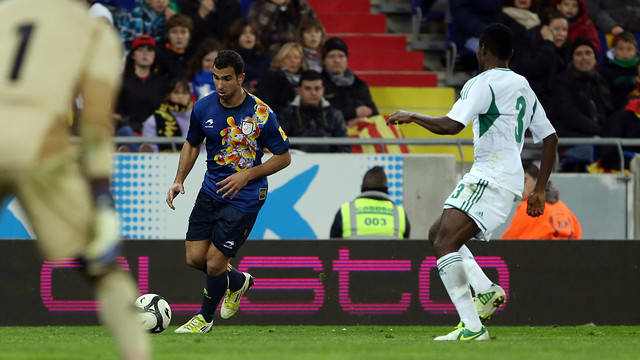 There are eight Barça players involved in what has become a Christmas tradition for the Catalan national team: Montoya, Tello, Cesc, Piqué, Alba, Bartra, Busquets and Sergi Roberto

The national football team of Catalonia is in action tonight (19.00, TV3) in the annual Christmas friendly match. The opposition this year is Cape Verde and the venue is the Lluís Companys Olympic Stadium.

Debutant manager Gerard López also spent time at FC Barcelona. Gerard played for the first team from 2000 to 2005 and before that had formed part of Barça B.

Cape Verde, a country with a population of just half a million people, have been one of the surprise packages of international football in recent years. In 2013 they beat Alex Song’s Cameroon to qualify for the African Cup of Nations for the very first time, and went on to reach the quarter finals.

And earlier this year, they made it into the final play-off round of World Cup qualifying, only to be disqualified after the result of their earlier match with Tunisia was overturned due to the fielding of an ineligible player.

This is the third year in a row that Catalonia have faced an African team in the annual fixture, following draws with Tunisia (0-0) and Nigeria (1-1). In twenty matches played since 1998, Catalonia have often met top quality opposition, including Chile, Ecuador, and Colombia, and have only been beaten three times, twice by Brazil and once by Argentina in their most recent defeat, 1-0 at the Camp Nou in May 2008.