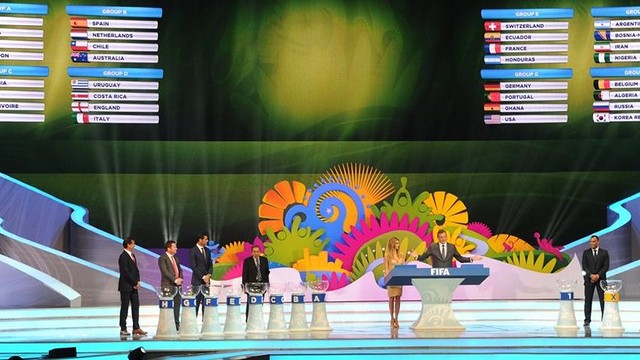 Spain have been drawn in the same group as Alexis Sanchez’s Chile, plus Holland and Australia

Brazil, with Neymar, Alves and Adriano share Group A with Alex Song’s Cameroon, Croatia and Mexico

Messi and Mascherano’s Argentina will meet Bosnia, Iran and Nigeria

In Costa do Sauipe, Brazil, the draw was held earlier this evening for the 2014 World Cup, to be played from June 12 to July 13. Defending champions Spain, with a squad that is once again likely to feature several players from FC Barcelona, have been drawn in what many have already picked out as the infamous ‘group of death’. They start Group B on June 13 in a repeat of the 2010 final in South Africa against Holland, coached by former FC Barcelona manager Louis Van Gaal. Next they face a strong Chile side featuring team-mate Alexis Sánchez, who Spain beat 2-1 in the group stages four years ago. In theory, the weakest team in the group is Australia, who Spain meet in their final fixture, although the Socceroos have already shown in previous World Cups that they are not a team to be taken lightly.

Host nation Brazil, whose squad could include as many as three Barça players in Neymar, Dani Alves and Adriano Correia have been drawn in the same Group A as Alex Song’s Cameroon. The draw has been relatively kind to the nation with a record five titles to its name. Before meeting the West Africans, they will face Croatia in the opening game of the tournament, and then Mexico. The teams finishing first and second in this group will meet the top two teams from Group B in the second phase. In other words, there is a very good chance of a further match-up of Barça players in the first knockout round, maybe even a mouth-watering meeting between Brazil and Spain, two of the hottest favourites to lift the trophy.

Leo Messi and Mascherano have, at least on paper, been handed the easiest ride of all. In Group F, they will face the only debutant in the finals, Bosnia & Herzegovina, plus Iran and Nigeria, and if they make it into the second round, they will play a team from Group E, another of the theoretically weaker groups.