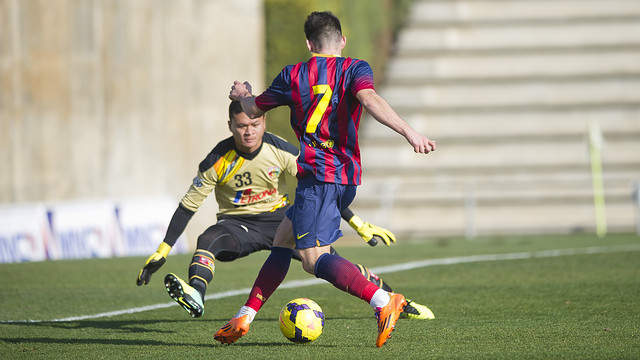 Comfortable victory for Barça B this Wednesday at the Ciutat Esportiva Joan Gamper against Mitra Kukar FC. The match, which was part of the Indonesian team’s tour of Spain – they’ve already played against Atlético Madrid, Villarreal, Valencia and Espanyol – was won thanks to goals from Munir (2) and Denis Suárez (2).

The Blaugrana were quick to take control of possession and they soon started creating chances on Mitra Kukar FC’s goal. Juan Román on the left and, especially, Adama Traoré on the right created a constant flow of opportunities for Barça B.

After only eight minutes, Munir scored the opener with a powerful shot from just outside the area after receiving an assist from Adama. The match was being dominated by Barça and on 32 minutes Munir got his second, who was once again assisted by Adama. The teams went to the break with the 2-0 on the scoreboard.

Eusebio sent in Dani Nieto and Bagnack at the start of the second half. The visitors pressured Barça B high up the pitch and they created a couple goalscoring chances. Eusebio responded by sending in seven new players (Patric, Denis Suárez, Sanabria, Planas, Samper and Espinosa) and Barça B slowly regained control of the match.

Denis Suárez closes out the game

Denis Suárez scored his first goal on 74 minutes after a great team effort which saw the newly signed Barça B player fire to the back of the net after a back-heel assist from Juan Román. Denis Suárez got his second after a cross from Patric.