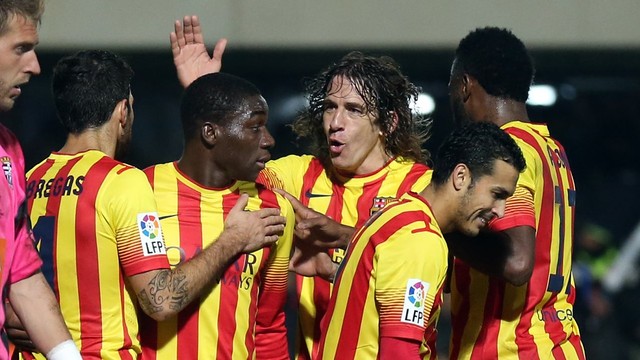 Barça B’s young Cameroon striker made his full debut in Cartegena and marked the occasion with the team’s fourth goal of the night.

“When you get a chance with the first team, you dream of scoring and this Friday that’s what happened to me” Dongou after the game

Jean Marie Dongou made a debut on Friday night that all Barça’s young players dream of –scoring with the first team. His goal came  after following up on a Pedro shot that came back of the woodwork. Dongou had come on on 78 minutes, replacing Alexis and he needed just 10 minutes to make his mark. After the game, the young Cameroon player explained: “when you get a chance with the first team, you dream of scoring and this Friday that’s what happened to me”.

Dongou came to the Club in 2008 and is the first African player to come through the FC Barcelona academy and make his debut with the first team.  Born in Douala (Cameroon), Dongou has shown a hunger for goals throuhout his time at the Club – though curiously he has yet to get a goal for Barça B this season”.

The youngster is clear where his priorities lie despite his stunning debut, explaining: “I am very happy to have got this first official goal. It’s important to score with the first team, but  I am clear that Barça B is my team right now. It was a good game and I am happy that we won”.