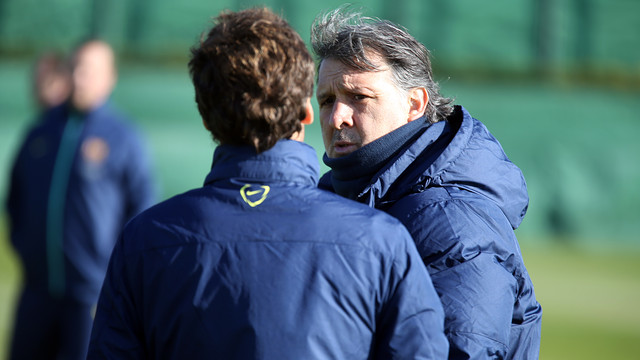 The Argentinian coach made it clear that there is no pessimism within the squad, despite losing at Ajax and Athletic Bilbao

He considers the game this Friday in Cartagena as “vitally important”

Gerardo Martino is experiencing something new at Barça. Since landing in late July his team had not lost a game until ten days ago , when they lost at Ajax (2-1 ). Now, following defeat at Athletic Bilbao (1-0 ) the experience is even newer. Barça take on Cartagena, in the Spanish Cup following two consecutive defeats. “It’s a vital match. Winning will bring the confidence back” he said at the start of the press conference.[[CITA_1]]Later, however, the first team coach made it clear that the team is ” really optimistic…we have to transform those feelings into what we do in the games…..no way are we pessimistic” he added, aware that there might be certain pessimism amongst the fans , especially after two consecutive defeats .

His optimism is mainly due to the good sensations, according to Martino, during the first 60 minutes of the game in Bilbao. “We played really well for an hour, and we probably should have been ahead… losing at Bilbao was completely different from the defeat at Ajax”, he said.[[CITA_2]]With regards to Friday’s match in Cartagena, he commented: “All games are tough. We know we’re playing a team from the third division, but we have to do our job and win, because it’s what we are here for”.

Asked if it was a less important match, before the Celtic game and particularly Villarreal, Martino replied: “Let me remind you that before the game with Ajax there was talk that perhaps that game was not so important. I don’t believe we should think beyond the next game, and the next game is in Cartagena”.

We have to translate our good feelings into how we perform on the pitch
We know we’re playing a team from the third division, but we have to do our job and win