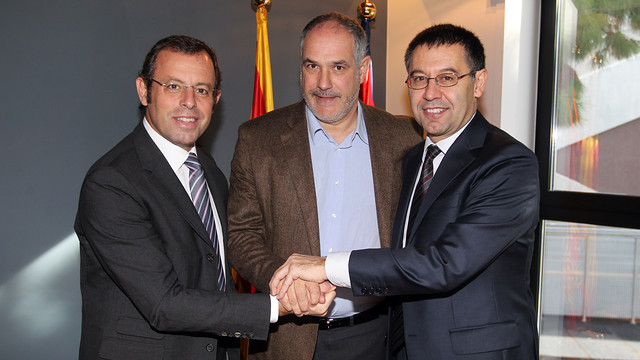 The contract was signed in the Club offices in the presence of President Sandro Rosell and sporting vice-president Josep Maria Bartomeu.

“You always have to be equal to the demands of this Club, this shirt and this badge.

Andoni Zubizarreta signed a contract extension this Tuesday morning, which will keep him at the Club until June 30 2016. The contract was signed in the Club offices in the presence of President Sandro Rosell and sporting vice-president Josep Maria Bartomeu.

The signing happened after the Club’s announcement at the beginning of November that Andoni Zubizarreta would be extending his contract as Director of the Sports Area of Football until June 30th 2016. Zubizarreta, who is in his fourth year as sporting director at the Club, signed an original contract that was due to end at the end of the season and will thus extend his stay for a further two years.

“A feeling of responsibility and happiness”

Zubizarreta thanked the board for the confidence they have placed in him and admitted that the responsibility he has is greater than ever: “ there’s more responsibility because you always have to be equal to the demands of this Club, this shirt and this badge. I’m happy with the confidence shown in me, for the feeling of continuity, but I also know this is a challenge I have to face ever day. The President is happy with the job I’ve done and I feel a lot of confidence from him and I’m aware of the excellent relationship we’ve had over these last three years. This is a really demanding job and just good marks aren’t enough – you have to get an excellent all the time!”.

Zubizarreta reckons: “there is still a lot to be done” in the coming years, with the contract extensions for Iniesta Piqué, Bartra or Montoya and finding a substitute for Víctor Valdés – with Zubi insisting: “we’ll work to make sure we have the best keepers for the 2014/15 season”