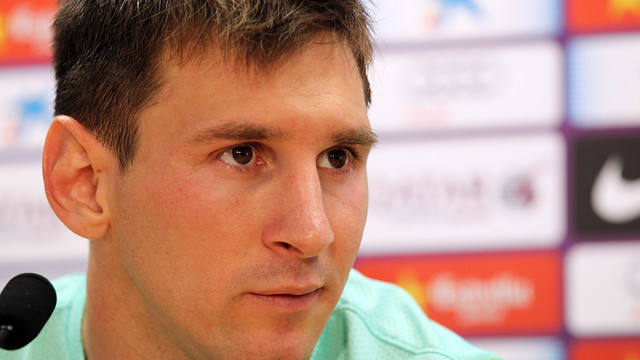 Ten years on, Messi recalls: “I’d fought hard to make that moment happen and it was really special”.

The Argentinean remembers the experience on the Barça TV programme Porta 104,

This Saturday marks the tenth anniversary of Leo Messi’s debut with the Barça first team, when he played in a friendly in Portugal against Porto. The Barça TV programme Porta 104 has produced a special report called  ‘El dia que va debutar el 10’, which features Messi’s own memories of the game:  “ 16th November 2003 is a very important date for me, because that’s when I was able to make my childhood dream come true – It was a very happy day for me. I’d fought hard to make that moment happen and it was really special”.

How did he find out?

In the report, Messi explains how he first heard he was to make his debut, when the academy team co-ordinator  Josep Colomer brought him the news:  “I remember that we were training with the Youth A team and when it finished, Colomer talked to me about a few things and then told me that I would be travelling with the first team. He told me that I should just go and enjoy the game and the experience, but when I came back I should concentrate on the Youth A team”.

Keeping his feet on the ground

Messi’s parents echoed the words of his Youth A team coach  Juan Carlos Pérez Rojo when he told them about the upcoming debut: “they said I should enjoy everything I was doing and that there was no reason to make any change – I should just continue in the same way”.

Ten years later, Messi believes that he is still the same person he was when he made that trip to Portugal: “I think that I continue to be the same person . I see things in the same way, though I have grown and learnt how to value things”.