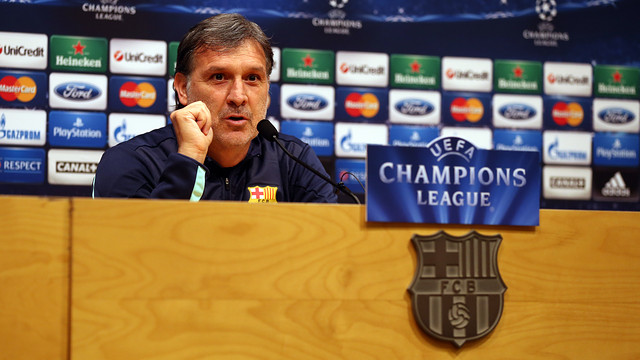 The manager is wary of Milan’s potential ahead of tomorrow’s match:”We have to play a good game to win the three points”

Before the press conference got underway, Tata Martino sent a message of encouragement to Jonathan dos Santos, who underwent surgery this Tuesday: “I want to send him my regards and all of our support. I hope he has a speedy recovery.”

[[DES_1]]Tata Martino reminded the journalists gathered in the Ricard Maxenchs press room of the importance of tomorrow’s Champions League clash with AC Milan. “It’s of vital importance to us seeing that we’re on the verge of qualifying [for the next round].” A victory over the Italian team would give FC Barcelona passage to the Round of 16, which would “give us a certain tranquility” ahead of of the last two matches of the group stage.
[[CITA_1]]
In addition, the manager isn’t paying too much attention to Milan’s recent streak of poor results (one draw and two defeats) since the two teams faced off at the San Siro two weeks ago. “I have a lot of respect for the club and players of Milan. If you don’t play well, they can hurt you. We need to have a very good game to win the three points.” He added with a touch of irony: “We’re also in a crisis and I don’t think there’s too much of a difference in how both AC Milan and FC Barcelona are coming into the match. In these circumstances we’re the same.”

Martino then defended how Barça play, even though he admitted that there’s room for improvement. “There’s room to improve and I don’t have any doubt that we can do it, both collectively and individually. I believe that our collective form influences the individual form of the players,” he explained. He added: “We insist and try to follow the same path, the path that makes Xavi and Iniesta important.” But he added that there are players “that give you alternatives during different periods of a game.”
[[CITA_2]]
When asked about Leo Messi, Tata Martino said, “I’m very content to have him on the team. I expect him to contribute what he usually contributes to the team, he’s very decisive for us.”