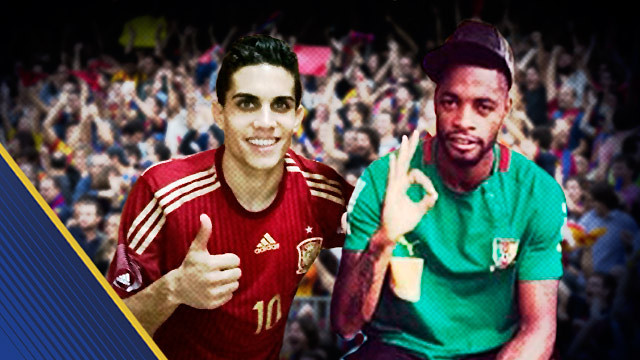 Marc Bartra made his debut with Spain at the weekend, whislt Alex Song helped ensure Cameroon will be in the finals

Fifteen squad players look certain to be in Brazil, with six more on the fringes

This weekend’s internationals have demonstrated that there are two more Barça players who look set to stake a claim to be on the plane to Brazil next summer: Marc Bartra and Alex Song. Bartra made his full debut with the World and European champions in a friendly against Equatorial Guinea, whilst Song helped Cameroon book a place in the World Cup Finals by beating Tunisia 4-1.

Alex Song thus became the 15th Barça player who can be pretty certain to be playing in Brazil next summer, alongside Valdés, Piqué, Cesc, Puyol –confirmed by Del Bosque-, Xavi, Pedro, Iniesta, Busquets and Jordi Alba for Spain, Alexis Sánchez for Chile, Messi and Mascherano for Argentina and Dani Alves and Neymar for the hosts Brazil.

If all 15 make the cut, Barça will have improved on the 14 squad members who took part in the 2010 World Cup in South Africa.

More on the fringes

Marc Bartra is part of a group of players who has been on the fringes for selection, alongside Spanish hopefuls Montoya and Tello – who have both been called up in the past and Adriano  – who made his debut with Brazil in 2003 and has featured regularly since, but faces tough competition for a full back spot. Afellay and Dos Santos are two players whose presence will depend on their recoveries from the serious injuries that have currently sidelined them.

In all, that leaves just four players from the current squad who, on the basis of recent international call ups, don’t look to be in the race for a place in Brazil: – Pinto, Oier, Sergi Roberto and Cuenca.