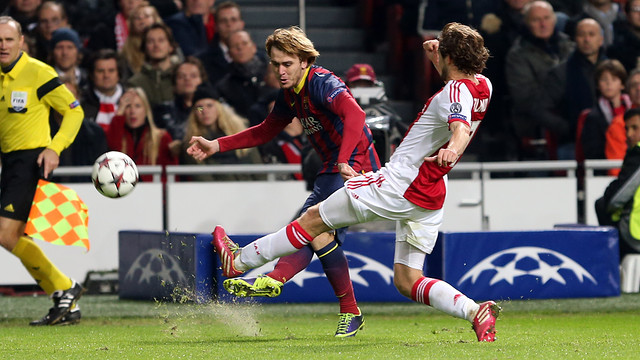 Patric Gabarrón made his first team debut in an official game for Barça, whilst Adama Traoré followed up Saturday’s debut with his first appearance in Europe.

Patric played for 26 minutes and Adama came on 12 minutes before the end.

Even though the game ended in defeat, tonight’s game will be a special memory for Patric and Adama in the future – with both players making their European debuts for the Club. Both youngsters came on in the second half – Patric for Puyol 26 minutes from the end of the game and Adama for Cesc with just over 10 minutes left to play.

Patric came to the Club in 2008, signed from the Villarreal youth set up, and was soon making his way up through the academy ranks until he reached Barça B. He made his first team debut in the final of the Catalan Cup against Espanyol in 2013. Tonight saw him come on in the right wing back position and managed a shot, which unfortunately flew high.

Adama  – who made his full debut last Saturday against Granada- looked lively when he came on with 12 minutes to play – sitting just in front of Patric and always willing to take his man on. The two youngsters’ debut proved a positive point for Barça, despite the defeat.