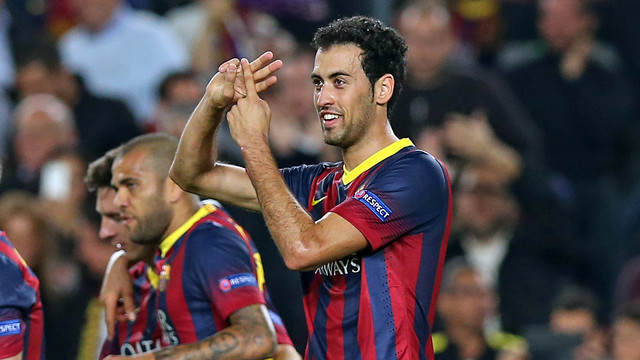 Midfield powerhouse Sergi Busquets gave an interview this week to Canal+ TV in which he discussed his early years at the Club. The Catalan midfielder, who makes no secret of his desire to avoid the media spotlight, also expressed his gratitude to former manager Pep Guardiola and revealed that he doesn’t expect his career to last beyond his early thirties.

Sergi gives a rare peek into the private world of one of the most down-to-earth people you can hope to meet in elite football.  He discusses the downside of having a famous surname and reveals that the fact that his father defended the Barça goal for several years left him open to unfair criticism from other children: “When you’re a kid, having a surname like that brings more negatives than positives”.  He also confirms that he can be a little uncomfortable in the media spotlight. “I’m not a media person, not in the slightest”

Thanks due to Pep

He singles out former manager Pep Guardiola as the man who gave him his chance to break into the team and then gave him the continuity to consolidate his position. “Who knows if I would have made it?  He gave me the chance to make my first team debut and consolidate myself.  I’ll always be grateful for that”.

“We can’t compare ourselves with five years ago”

However, despite his gratitude for his former boss, Busquets is firmly looking to the future of FC Barcelona. “I believe that football is always advancing and we can’t compare ourselves with five or ten years ago”

Finally, Sergi reveals that he does not see himself playing beyond his early thirties: “I don’t think I will have a very long career.  I don’t think I’ll be playing at the age of 34 or 35”.

The interview will be broadcast on Thursday evening.