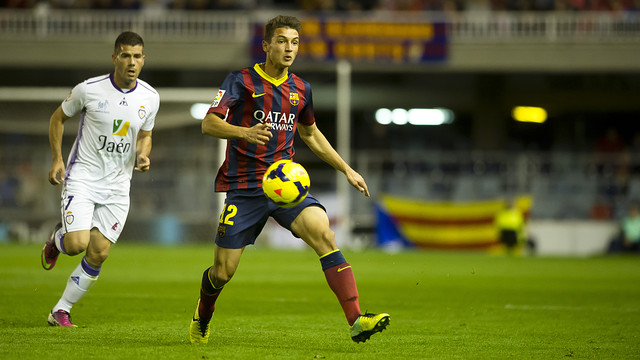 Goals from Machado and Jona just before the break denied Barça B the chance to get back on winning track. A Curto penalty finished them off

Adama and Samper made a difference in the second half, but it wasn´t enough to change the result

Barça B have suffered at the hands of one of their most direct rivals. The Andalusians went two-up through Machado and Jona, and despite Eusebio sending on Adama, Samper and Sanabria in the second half, they couldn’t get back into the game, and a Curto penalty completed Jaen’s job. The match was preceded with a minute’s silence in memory of youth player Adrià Vilamitjana of Gironès-Sabat.

Both teams were clearly desperate for the three points at the Miniestadi. Barça went for a very attack-minded formation and almost scored early on through Joan Roman, while there were also claims for a penalty on Dongou.

But despite FCB’s strong start, the first half was an evenly balanced affair. However, Jaén had only caused trouble with a few long-range efforts before a Jona pass found Machado, who went on a solo run before slotting the ball beneath Masip.

The setback didn’t cause Eusebio to change his tactics, and Joan Román and Dongou were particularly effective as the home side pressed forward in search of an equaliser.  Dongou came closest with a left-footed strike that skimmed wide of the post. Barça B were well on top at this point, but the goal just didn’t want to come.

Considering the display the reserves were starting to produce, what happened at the end of the half was a cruel blow. In the 41st minute, Jona  broke brilliantly through the Barça defence to connect with a cross from the right and beat Masip at the near post.

Fresh air from Adama and Samper

Eusebio sent on two fresh pairs of legs at half-time, and both substitutes excelled. Adama added depth to the right wing and Samper controlled the tempo in midfield.

Denis Suárez almost scored from a free-kick, but goalkeeper René pulled off a fine save. It seemed incredible that the Blaugrana hadn’t found the net.

Eusebio sent on Sanabria late in the game to add even more firepower to his forward line, but the game ended in the worst possible fashion. Adama committed a highly questionable penalty and was red carded. Curto stepped up to take the spot kick, and converted to make the final scoreline 3-0 to the visitors.