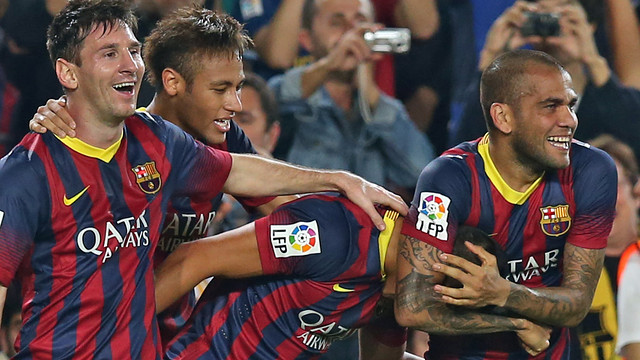 Friday November 1, All Saints’ Day … and a derby. The Barça v Espanyol match will be played on an atypical, festive day in Catalonia. That means it’s a good time to come to the Camp Nou. The team’s extraordinary form in La Liga is also an incentive: Barça are league leaders with 10 victories and 1 draw after 11 matches. The team’s last two games, against Madrid (2-1) and Celta (0-3), have boosted Barça’s morale.

Guessing Barça’s starting line-up is nearly impossible. The manager Tata Martino has gradually rotated his most-used men over the course of the season. For the derby, the Argentinian manager won’t be able to call on Adriano, who is injured. In addition to the Brazilian, Dos Santos, Jordi Alba and Afellay (all injured) will also miss the match.

Espanyol come into the derby with one victory from their last six matches. Manager Javier Aguirre may not be able to call on Stuani, Sidnei and Javi Lopez, all of whom are doubtful due to fitness concerns. On the other hand, David López will be able to play. Even though he was booked for the fifth time this season this week, the disciplinary committee has yet to meet this week, so the player will be available for selection. Former Barça players Lanzarote, Víctor Sánchez, Sergio García, Simao and Abraham will also be available for selection.

The Camp Nou is traditionally a difficult place for Espanyol. They have only won once away to FC Barcelona in 31 years. The last two times Espanyol visited the Camp Nou they were defeated by a 4-0 scoreline.