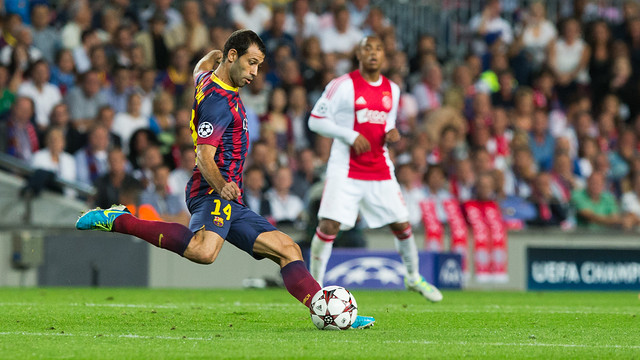 The Argentinian says that “the team is getting things right, and not just wrong.” Neither does he think there is anything missing in Messi’s form

Javier Mascherano was the guest on ‘El Marcador’ on Barça TV after Wednesday’s game with AC Milan. As usual, the Argentinian offered plenty of honest, intelligent insight into the way things are going for the team. “We are comforted by the fact that we have done what we set out to do and now we have to make sure we win the group”, he said.

He also commented that Barça have no intention of changing their ways, for “this team’s style is marked by players like Xavi, Iniesta, Fàbregas and Busquets who never play the long ball because they don’t know how to and have never tried it. The question is whether we should reinvent ourselves a little, so that teams have to find other solutions and look for alternatives.”

Mascherano also defended the team against what he considers unfair criticism of late. “We are top of La Liga, we are through to the last sixteen of the Champions League, we have won the Spanish Supercup… We must getting some things right” he said. “People need to lighten up. We are not getting everything wrong, although we are aware that there are some areas that need improving.”

One area where the team is being commended is at the back. “Yes, we are more solid in defence” agrees Mascherano. “We’re more practical about it. We need to control the ball a bit better, but we’re winning it back in important places. Against Milan the football was more flowing in the first half.” So all in all, the Argentinian feels things are going very well for the team, even though “we do have to learn to control some game situations better.”