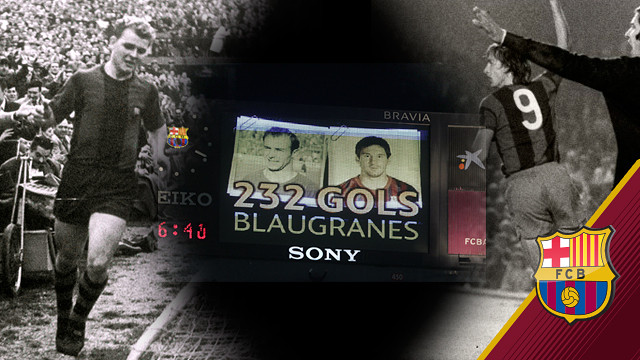 Ladislao Kubala, Johan Cruyff and Leo Messi have all provided memorable moments against Barcelona’s next opponents

Amongst the Barcelona v Granada matches at the Camp Nou there are three stellar moments: the largest winning margin ever, a dream debut, and an outstanding record. Three Superstars in FC Barcelona’s history were the protagonists. Below are the details from those matches.

Granada have played at Barcelona 19 times and have never gained any points. The most comprehensive defeat of these games happened in March 1961. Barcelona won 8-2. The legendary Ladislao Kubala was the star of the night with four goals. Luis Suarez (2), Ribelles and Coll rounded off the win.

On 28 October 1973 the Barcelona fans were able to see Johan Cruyff for the first time in a Barcelona shirt. That day the long awaited transfer came through from UEFA and the Dutchman was able to make his debut against Granada, scoring two goals. That Rinus Michels Barcelona side were winners, and ended up winning the League title after 14 years, with exhibitions like their 0-5 win at the Bernabeu.

One year and eight months ago, Messi became the top scorer in the history of the Club, in official matches . With a hat trick against Granada he reached the total of 233 goals, overtaking César Rodríguez, who had held the record for more than half a century. This Saturday, before another game against the Andalusian outfit, Messi will show off his third Golden Boot.