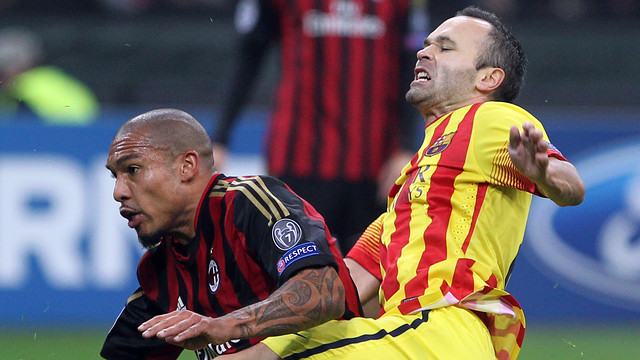 Of Milan’s last seven visits to the Camp Nou, they’ve only managed to win once

FC Barcelona will host AC Milan this evening for the fourth round of the Champions League group stage. Here is a collection of what we consider to be the most interesting stats and facts surrounding this evening’s match:

• A victory for FC Barcelona would mathematically qualify the team for the Round of 16.

• Of the seven matches played at the Camp Nou against AC Milan, only one ended in victory for the visiting team. The rest saw the home team win four games and draw twice.

• The last Barça-Milan at the Camp Nou was played on March 12, when Barça won 4-0. Messi (2), Villa and Jordi Alba got on the scoresheet that evening.

• Since the match at the San Siro, AC Milan have lost twice (3-2 against Parma, and 0-2 against Fiorentina) and tied once (1-1 against Lazio).

• Cesc Fàbregas and Alexis Sánchez are one yellow card away from being suspended.

• The Chilean has scored a total of eight goals in the last seven matches, this includes matches with the Chilean national team.

• The referee for this evening’s match is the Serbian Milorad Mazic. He’s refereed Barça on one occasion, when the Blaugrana hosted Spartak Moscow (3-2) in the 2012/13 edition of the Champions League. He has never refereed AC Milan before.