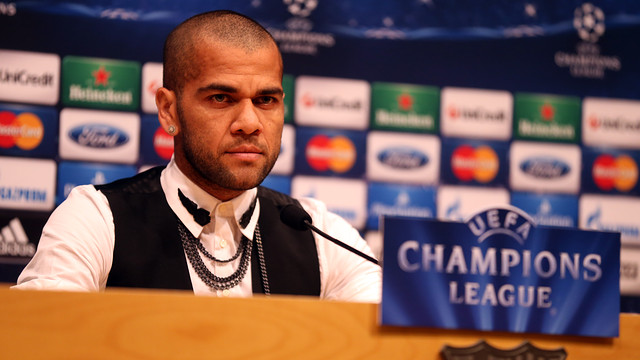 “Our numbers are spectacular, but we aren’t playing as well as we have in past years,” says the right back

Dani Alves focused on Barça’s style of play in the pre-match press conference ahead of tomorrow’s match against AC Milan. “We will defend our style of play to the death because it’s what made us the best team in the world,” declared the right back. He also admitted that Barça are employing alternatives to how they play: “Before we were monotonous, and it made things easier for our rivals, now we’ve introduced a variation which is giving us good results.”
[[CITA_1]]
This “monotony” in Barça’s play that Alves highlighted prompted a flurry of follow-up questions from the gathered press. “The only thing that’s different now is that we don’t need 18 to 20 passes to reach our rivals’ goal, we’re more direct,” he explained. The variant, according to the right back, doesn’t necessarily change the team’s style of play: “We still have a lot of possession and we dominate matches. With the exception of the Rayo game, it’s always been like that.”

Dani Alves then went on to say that Barça can and should improve: “Our numbers are spectacular, but we aren’t playing as well as we have in past years.” The objective is to “improve in each match, even though it’s harder every time.” He added: “If we continue with our philosophy, the debates will eventually go away. The best thing about this team is that we’re always ready to compete.

“There will always be debates,” said Alves. “Before we needed alternatives, now it seems we’re missing a center forward…” he said with a bit of sarcasm. He then said that he’s not “worried about Messi’s form” and that “I’d bet that Messi scores a goal” against Milan tomorrow.

When asked about FC Barcelona’s rival tomorrow, the right back joked about the unusually high number of showdowns between the two teams: “Milan are almost family.” He then added, in a more serious tone, “historically they are a great team and it doesn’t matter how they come into the match. I’d say that they’ve never come here on their top form and it’s always been difficult for us. Tomorrow will be the same.”