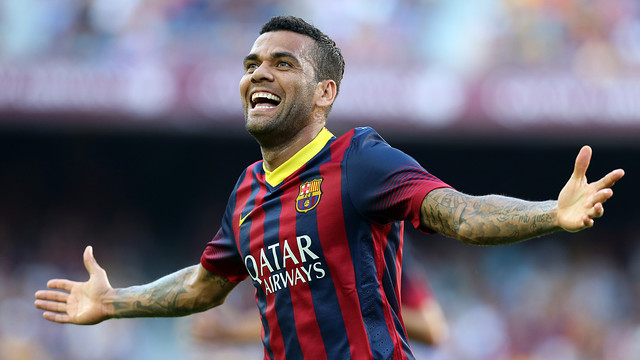 In an interview with Sport newspaper, Dani Alves has denied that the World Cup is having any effect on FC Barcelona’s season

He has also spoken honestly about his future at the club, admitting that he does not plan to finish his career in a Barça shirt

Dani Alves is always a great interviewee. Rather than dodge awkward questions with ambiguous answers, he likes to tell things as they are. An article printed in today’s edition of Sport is another example of how the straight-talking Brazilian is not afraid to speak his mind.

He begins by discussing the team’s style, freely admitting that “over time, opponents have got to know us better, they study us more, they know our tactics, our way of playing, and what they can do to hurt us.” Which is precisely what Bayern Munich did last season, although Alves insists that “we weren’t one hundred per cent that day, we didn’t have the players we needed to be able to really compete against a side like that … But with our full team, it’s impossible for anyone to beat us seven-nil. It could never happen again.”

He also claims that whenever people start questioning the team, it’s usually the media who are to blame. “When the press start debating, it generates doubts in people’s minds” he says. “The problem is that the fans are so pessimistic. In two days, they switch from saying we’re great to saying we’re rubbish. It has always been like that and it won’t change, although perhaps the current team has managed to change that a bit.”

He also flatly denies that the players are deliberately taking things easy this season with the World Cup in mind. For a start “if you don’t have a good season then it’s going to be hard for you to be in form for the World Cup.” Also, Leo Messi’s injury certainly doesn’t have anything to do with Brazil 2014. “We are footballers, and if we get injured it’s because we’re footballers, and not because we’re saving our strength for the future.” And ultimately, although “the World Cup is super-important, a dream chance to represent your country, and I really hope we can win it, life will go on just the same if we don’t.”

Tata Martino’s rotation policy is another issue about which the press has voiced concern, and Alves does agree in that “the more I play, the better I feel, I feel more into my playing rhythm. And if I miss a game, the next one is harder.” However, “when you sign for a club, nobody guarantees that you’re going to get a game. All they guarantee that you are going to have to work hard to show your top level … If there are long faces, then the problem is with the players who have those long faces. At the end of the day, this is a team game, and out of respect for your colleagues you should never put on a long face. If you do, then you’re not with the team and this becomes an individual sport. The manager makes the decisions and you just have to accept them, whether you like them or not.”

He also spoke very directly about his future at FC Barcelona. He has a contract until 2016, but unlike many of his team-mates, he is making no promises about hanging up his boots at the club. In fact, “what I want to do is end my career where I started, in Bahia. It would be hypocritical of me to say that wanted to end my career here because that idea has never come into my head.” And as far as Alves is concerned, he has every right to want that. “It seems to me that when a club gets rid of a player, that’s fine, but if it’s you who wants to go, it’s because you’re only in it for the money. It’s not like that. You want to try other things, other challenges.”

But Alves fully appreciates the importance of playing for such a huge club. In fact, before coming to Barça “I wasn’t all that well known in Brazil. It was playing for Barça that got me recognised. In my country, they started knowing me much better after I signed for Barça.” And as long as he is here “I am going to defend the club as if I had been born here, as if I had grown up here, because that’s my philosophy.”

When you sign for a club, nobody guarantees that you’re going to get a game