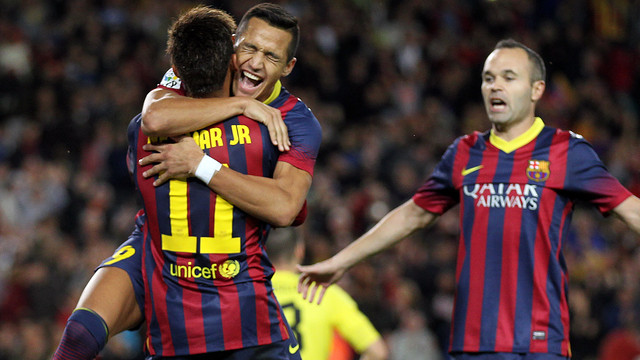 Alexis Sánchez scored his 33rd goal for Espanyol last night. In 101 appearances, his goals have tended to be decisive, 14 of them having put Barça into the lead, as was again the case in the derby. 12 others have served to extend leads, 6 were equalisers, and one was to narrow the gap.

Here are some other interesting facts from the local derby:

– Tenth shutout of the season. Atletico Madrid in the second leg of the Supercup, Ajax and Celtic in the Champions League and Levante, Malaga, Rayo, Almeria, Osasuna, Celta and Espanyol in la Liga all failed to score against FCB.

– Espanyol have not scored at the Camp Nou for five years, their longest scoring drought ever at the home of their local rivals.

– Mascherano made his 150th official appearance for the first team.

– This was Montoya’s third start of the season, and his first as left back. At Vallecas and in Pamplona, he took Alves’ place.