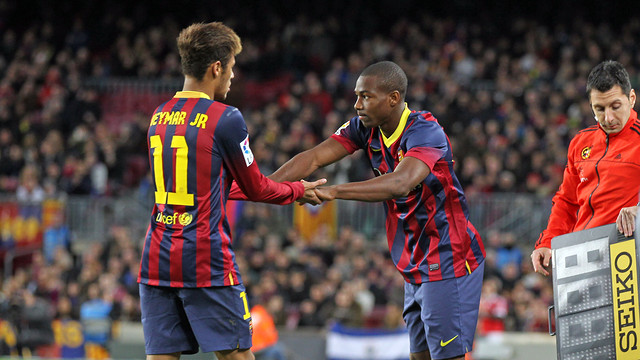 Just 17 years and 10 months old, the Catalan winger is the eighth youngest player to figure for Barça in the league

Adama Traoré fulfilled the dream of every Masia player today when he made his debut with the FC Barcelona first team. What’s more, he made his debut in an official game, rather than a friendly  – with the 17-year-old coming on for Neymar on 81 minutes and even getting a chance to score on 87 minutes.

At 17 years and 10 months, the Catalan born Adama. with Mali origins, became the eighth youngest player to play in the league for Barça and boss Tata Martino explained: “it’s something special for such a young player to train with the first team, which he has been doing all week. We saw the chance to put him on the bench and give him some minutes on the pitch. Neymar had a long journey midweek and it was worth giving the lad a chance”.

Adama spoke after the game and explained. “I’m very proud after so many years at  La Masia. I am here thanks to the coaches I’ve had and my team mates. I’d never imagined what this would be like -it’s easy to play alongside these players and they give you a lot of confidence”.

Adama began the season under Jordi Vinyals in the Youth A team, but has made great progress and featured in Eusebio’s B team over the last few weeks.