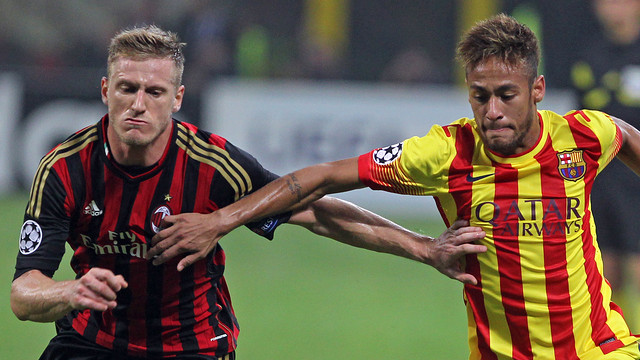 Barça’s next Champions League opponents are tenth, seven points adfrift of Europe and18 of leaders AS Roma, with one game less

AC Milan’s season is not going at all to plan. The return of Kaka was meant to give a breath of fresh air to the team but instead the red-and-blacks are in big trouble. But neither has luck been on their side since holding Barcelona 1-1 at the San Siro, with late goals turning a potential draw into defeat away to Parma (3-2), and a home win against Lazio into a draw (1-1). Last weekend, they tumbled at home in the San Siro to Fiorentina (0-2).

At Parma, they went behind to two early goals from Parolo and their former player Cassano, who both beat goalkeeper Gabriel following defensive errors.

But in just three minutes, from the 61st to 63rd, Milan pulled back level with goals from Matri and Silvestre. The first was a well-placed finish from the striker, and then the centre back pounced on a rebound off the bar to beat Mirante. But four minutes into stoppage time, Parolo grabbed Parma’s winner from a long range free kick.

Kaka’s return to the starting eleven was the big news when Lazio were the opposition at the San Siro. Milan took the initiative with some quick combination football, although there was no score at the break.

After the restart, Kaka curved home a beautiful strike from the edge of the area to delight the home crowd. The three points seemed to be in the bag, but then Ciani picked up a loose ball in the area to get Lazio back on level terms, and that’s how the game ended.

The visit by Fiorentina to the San Siro seemed the ideal chance to get Milan’s league form back on track, against a side that had just lost 2-1 at home to Napoli.

Allegri opted for an attack-minded formation with all of Balotelli, Birsa and Kaka starting, but the star of the day turned out to be Borja Valero. He supplied the assist for the visitors’ first goal, scored by Vargas, and then got the second himself.