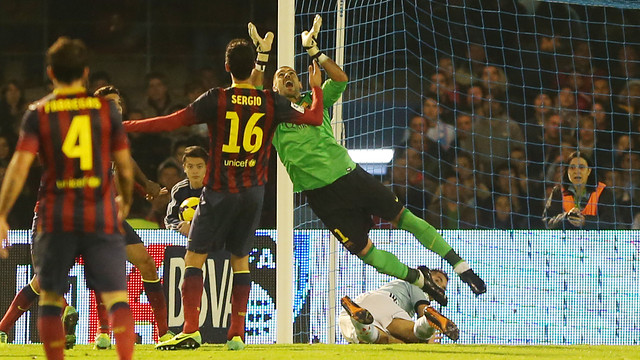 FC Barcelona collected yet another full set of three points with a 3-0 win in Vigo. Here we pick out a selection of facts related with Tuesday night’s game:

• FC Barcelona have kept nine clean sheets in their 16 official matches played so far this season.

• Not once this season has Valdés played three consecutive game without keeping a clean sheets. Before the shutout against Celta, he had conceded goals against Milan and Real Madrid.

• On the day that Alexis, who has scored nine goals this term, made his one hundredth appearance, Sergio Busquets played game 250 in a Barça shirt.

• No player made more completed passes than Dani Alves (66). Bartra was second in the list (63).

• It was also the Brazilian fullback who recovered the most balls (15).

• In the five games that Bartra has started at centre back, FCB have only conceded one goal.

• Puyol is similarly effective. In the two games he has played since returning, Barça’s goal has remained intact both times. His defensive partner on both occasions was Bartra.

• Apart from Valdés, the players who have the longest runs of appearances in the starting eleven have been Adriano (10), who was taken off last night as a precautionary measure, and Busquets (4).

• Alexis has six league goals this season. Last night was the first time he had ever scored against Celta.

• For Cesc, it was only his second goal of the league season. In total, he has 32, the same as Alexis.

• Balaídos saw Alexis and Cesc both score in a game for the sixth time. Every time the duo have both found the target, Barça have won the match.

• Neymar Jr missed only his second game of the season. The other was the 2-0 win in Almeria.