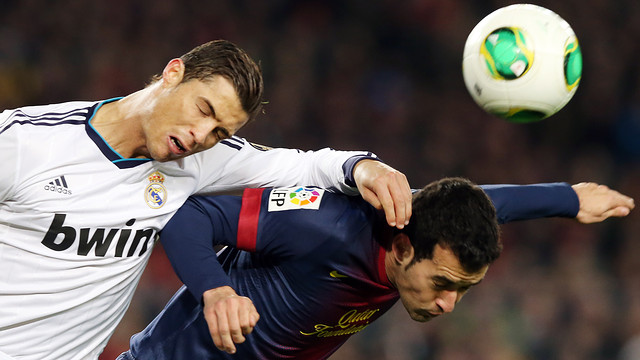 It’s been nearly 8 months since the last meeting between the two.

Barça’s main selection issue is at the heart of defence, whilst Madrid’s is in the midfield

With both teams pretty used to facing each other quite frequently over recent seasons, this evening’s game looks set to answer quite a few questions, not least because Barça and Real Madrid have gone eight months without facing each other – since March 2 . With recent seasons featuring regular clashes between the two, there’s not been such a gap between games since 2010. Now though, the teams are back  – and so too is the passion.

It’s not just the gap since the two last met that is creating a buzz, there’s also Barça’s great unbeaten start to the league season and Madrid’s good form since the international break, with wins over Malaga(2-0) and Juventus (2-1), results that have boosted Ancelotti’s team’s confidence and cut the difference between the two from five, before the internationals, to three at the moment.

It’s also a Clasico with few injuries, but a number of selection questions. Barça will be without the injured Jordi Alba, Dos Santos and Afellay, whilst Cuenca and Oier have been dropped from the squad. Xabi Alonso is Madrid’s only injury absence, but neither team seem to have established a fixed starting XI just yet.

For Barça, the main question mark is over the heart of the defence, where Puyol, Mascherano, Bartra and Piqué are all vying for the two places, whilst Madrid have questions in the midfield and out wide, with the possible inclusion of Gareth Bale likely to change Madrid’s line up from recent games.