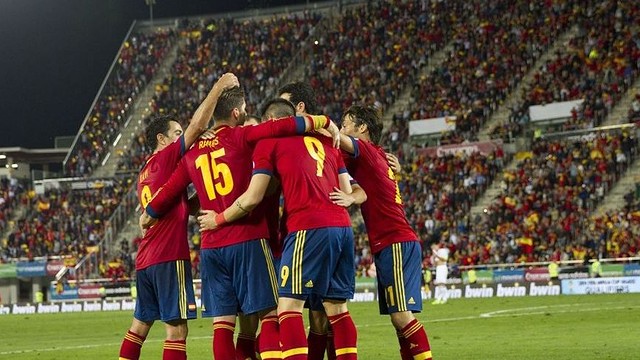 Piqué, Sergio, Xavi, Iniesta and Pedro feature in Spain’s victory (2-0) and book a place in Brazil 2014

The Spanish national team, including seven Barça players, has booked its place in the next world Cup finals in Brazil 2014.  Manager Vicente del Bosque included Piqué, Sergio Busquets, Xavi, Iniesta and Pedro in his starting line-up tonight against Georgia.  Valdés, who started Friday’s match against Belarus, and Cesc Fàbregas, were on the bench.  The game had a special meaning for Andrés Iniesta, who played in front of his hometown fans in the Carlos Belmonte stadium in Albacete.  In the 25th minute, Pedro and Iniesta combined to set up Negredo for Spain’s first goal.

Spain, who only needed a point to clinch a place in Brazil, had an easy ride against Georgia.  In the 57th minute, Pedro was replaced by Juan Mata, who took just three minutes to score Spain’s second.  Five minutes later, Xavi, gave way to Koke.  Iniesta almost made it 3-0 in the 68th but his shot was deflected by Kashia for a corner.

With nine minutes left, Andrés Iniesta came off the pitch to yet another thunderous ovation.  Isco came on for the remaining minutes.