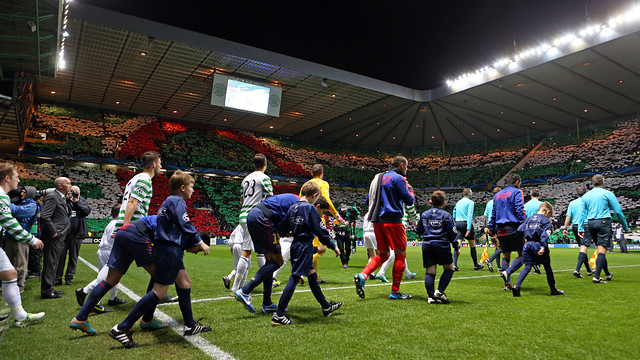 20.45, Canal Plus: Barça take on Celtic in the second round of the Champions League group stage in Celtic Park

Martino’s men come into the match after securing the best ever start to a league campaign in club history, but they’ll be without Messi

Barça return to Glasgow to play against Celtic in the second round of the Champions League. Celtic Park is a stadium that Barça know well seeing that the Blaugrana have played there four times in the last decade. The most recent clash between the two teams was played last year, when Barça lost 2-1 in the group stage of the Champions League. It goes without saying that the player know exactly what to expect when they walk out onto the pitch this evening.

Taking the match played in November of 2012 as reference, Barça expect an extraordinary atmosphere in the stands and opponents that will presumably wait in their own half, and poised to make quick counterattacks. Just like last year, Celtic will try to impose its physical style of play and focus on winning set pieces.

Barça have seen it all since the start of this season. From teams that have tried a more aggressive approach to others that have ceded the initiative of the match to the Blaugrana. Up until now Barça have passed each test with flying colours, a fact reflected in the newest record set by the team: the best ever start to the league in Club history. This, along with the Super Cup victory and convincing win over Ajax, shows that Martino’s men come into the match on form.

This time, however, Barça won’t be able to field Leo Messi. The best player in the world picked up a muscle injury during this weekend’s league match against Almería and he’ll be out of action for two to three weeks. Other absences include Jordi Alba, Mascherano, Puyol, Cuenca and Afellay. Newcomers to Barça’s Champions League squad are two Barça B players: Sergi Gómez and Patric.

Celtic come into this evening’s match in need of points. While they sit atop of the table in their league, their defeat away to Milan in the Champions League leave them in need of a victory.