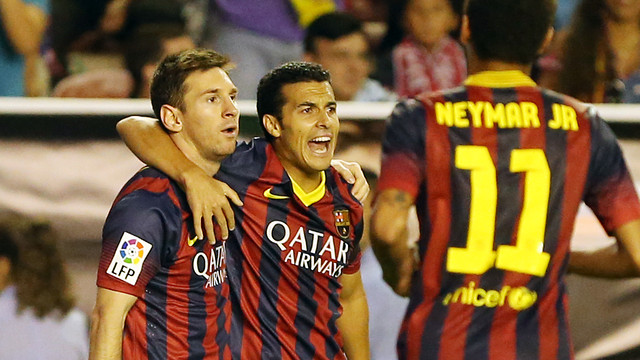 72 hours after the Clásico, the league leaders visit Balaídos without Gerard Piqué

After the Clásico and before the Catalan derby, FC Barcelona will play away to Celta Vigo. The Blaugrana will visit Balaídos this Tuesday evening (22.00, Canal+ Liga and GoalT) with high spirits after claiming victory over their arch-rivals (2-1) but they are fully aware that a slip up in Galicia would undo a job well done on Saturday in the Camp Nou.

Tata Martino has decided to continue with his rotation policy for this evening’s match. Gerard Piqué, a starter against Real Madrid, Oier Olazábal and Isaac Cuenca didn’t make the trip to Galicia, while the other 19 avaialble first team players did.

The manager warned that there would be rotations during the pre-match press conference on Monday, which means players like Montoya, Puyol, Sergi Roberto or Tello could feature in the starting line-up.

The Blaugrana will face a Celta side that thrashed Málaga 0-5 this weekend, but it’s worth noting that the Galicia-based team had strung together a seven-match winless streak prior to the match in Andalusia. Celta’s biggest struggle is winning at home as they have yet to win any of their five matches at Balaídos -losing two and drawing the other three.

Luis Enrique, one of Celta’s four former FC Barcelona players, won’t be able to call on Bellvís and Llorca and Krohn-Dehli’s fitness might prevent him from featuring against Barça.