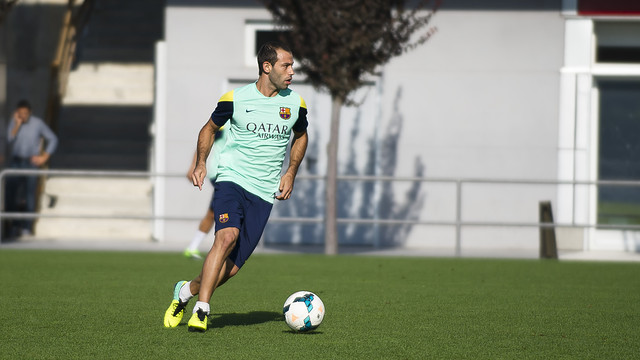 The Argentinean, who has been out injured since the Real Sociedad game, took part in this morning’s practice match against Sant Andreu.

The practice match, played at the Ciutat Esportiva, ended 4-1, with Calvet, Munir, Denis Suárez and Planas getting the Barça goals

Javier Mascherano worked with the rest of the squad this morning for the first time since he picked up a thigh injury against Real Sociedad on September 24th, taking part in this morning’s practice match against third tier Sant Andreu at the Ciutat Esportiva.

The Barça team for the practice match included a number of Barça B players, with the injured  Alba, Cuenca and Messi not involved.  With the majority of the first team squad away on international duty, the available squad players figured in the first half of this morning’s match.

After leading 2-0 at the break, Barça finished 4-1 winners with Calvet, Munir, Denis Suárez and Planas getting the goals.