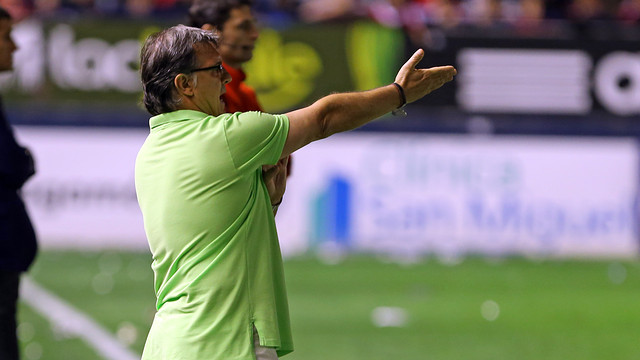 Gerardo Martino talked the to press after this evening’s goalless draw with Osasuna. The Blaugrana were not able to equal Real Madrid’s 1968/69 record, when they won their opening nine matches of the competition, but they managed to get a point. “We should have won given the chances we created. I’m pleased with the team’s performance,” explained Martino, who lamented his men’s accuracy in front of goal: “We weren’t accurate in front of goal.”
[[CITA_1]]
The final pass, crucial

“In the first half we were missing that final pass. We were off by centimeters. The clearest chances came from Montoya’s end, he went deep but he lacked a bit of precision in his final pass,” analysed Martino, who was clear that his men lacked “clarity” in the first half but in the second they created “four clear chances.”

The manager played down the fact that his team didn’t win the three points and he then praised his men for their effort: “I would be concerned if there had been a decline in our performance. We tied because that’s how it had to be, I don’t think our level has dropped,” said Martino, who admitted that “we were planning on Messi playing between 20 to 25 minutes.”

We should have won given the chances we created. I’m pleased with the team’s performance