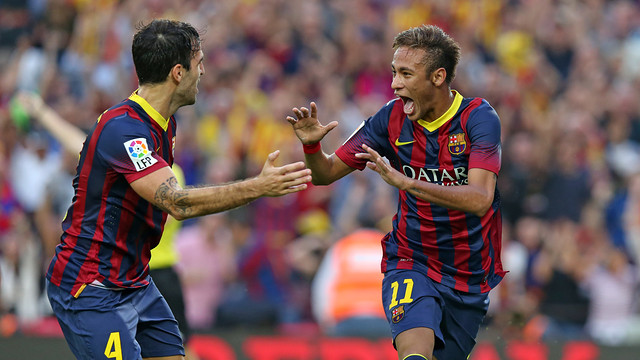 Strikes from Neymar and a spectacular Alexis second gave Barça the win that leaves them six points clear of Madrid.

Barça- Real Madrid games always provide plenty of images that stick in the mind – this time it was not just the wonderful tribute to Tito Vilanova in the pre-match mosaic, but also Neymar’s first Clasico goal and Alexis Sanchez’s magical chip for the second. The Chilean’s 72nd minute beauty ended up being the difference between the two well matched sides, after Barça had the better of the first half with some clever play, but were seriously threatened after the break, when Valdes again pulled off some superb saves.

Martino tried a new set up with Busquets, Xavi, Iniesta and Cesc holding onto the ball in the middle and Messi and Neymar up top, with freedom to roam wide or come into the centre. Madrid also sprung a tactical surprise, with Carvajal at left back and Ramos pushed into midfield behind a front three of Bale, Ronaldo and Di Maria, with the Welshman in an unfamiliar false number 9 role.

Barça started well and were clearly heeding their boss’ warning that they had to control the ball and avoid losing possession in dangerous areas. With both sides’ defensive anchors – Busquets and Ramos both picking up early yellows, neither team looked too comfortable on the ball, with the emphasis very much on not making mistakes. Then on 18 minutes, Iniesta pounced on a loose ball just inside the Madrid half and ran at the visitors’ defence, before slipping in Neymar on the left for the Brazilian to cut inside and fire low past Diego Lopez for the opener.

The Camp Nou crowd – full of banners and flags demanding Catalonia’s right to self-determination – erupted with the goal and their excitement lifted the team who upped their game a gear, with Messi almost immediately shooting just wide after escaping down the right and the Argentinean and Neymar were combining to cause plenty of problems for Madrid’s defence, as Barça stamped their style on the game.

Xavi knew that it was in Barça’s interest to slow the game down and avoid any end-to-end stuff to allow them to weave their web of close passing and the Catalan midfielder was soon dictating the pace in the middle again. As the half came to an end with Barça’s superiority clear to all, Madrid gave a warning of things to come though, when Cristiano Ronaldo cut in from the left and sent a low cross in towards the onrushing Khadira, Victor Vlades was equal to the German’s point blank effort, but the rebound also came back to him off the supporting arm of Adriano, who was on the ground after his tackle on Khedira.

After the break, it was Neymar who revitalised both the game and Barça, bamboozling Carvajal and bringing out a great stop from Diego Lopez with a powerful effort from the left after good work again from Iniesta. Then it was  Valdés who was called upon to once again save the team with a stunning save from a Ronaldo drive , Madrid were beginning to create in the middle now and the game began to open up – something that was always going to favour their style of play. With the yellow cards piling up and a bit of tiredness creeping in, Barça’s dominance of possession was also slipping.

Martino brought on fresh legs, with  Alexis coming on for Cesc and the side returning to a more familiar 4-3-3 shape as Madrid enjoyed their best phase of the game. Cristiano Ronaldo had a shout for a penalty turned down after a push from Mascherano and  Benzema rattled the woodwork with a shot from the edge of the box. However, once again Barça brought the game back to their pace and took control of possession to take the sting out of Madrid’s threat.

And that was when Alexis popped up, picking up a long clearance deep in Madrid’s half and creating a few inches of space away from Varane to chip an inch perfect effort over the Madrid keeper and into the back of the net for the goal of the night. Alves then nearly made it three, darting down the right and nutmegging Cristiano before firing straight at Diego López. Jesé’s injury time goal – rounding off a quick counter to make it 2-1, was too little too late for the visitors and Barça played out the final couple of minutes to take the three points and stretch their lead over Madrid to six.