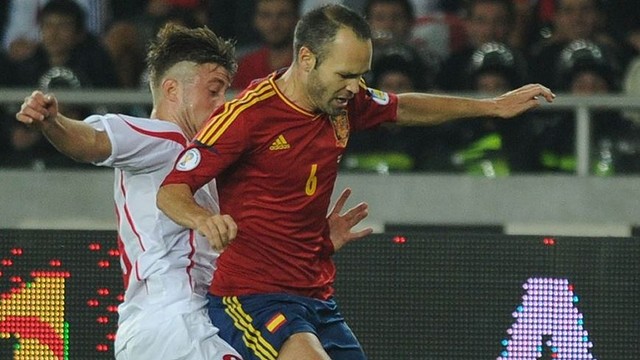 A draw for Spain against Georgia will see them through.

Eight Barça players can book their places for next summer’s World Cup tonight –   Valdés, Piqué, Sergio, Xavi, Iniesta, Cesc and Pedro with Spain and Alexis Sánchez with Chile. Both sides play the final qualifying game needing just a point to ensure qualification. Belwo we look at all the Club players’ international games:

Spain-Georgia (21.00). Andres Iniesta’s home town of Albacete hosts Spain’s final group game, with a point against Georgia sufficient to guarantee top spot – as indeed would any slip up by France at home to Finland, should the Georgians pull off an unlikely result against the current World and European Champions.

Chile-Equador (01.30). After letting a win slip away against Columbia last Friday, Alexis Sanchez’s Chile have another chance to qualify for Brazil, with a point at home to Ecuador enough to see them and Ecuador both through. Success would mean Chile reaching their second successive World Cup.

Brazil-Zambia (13.45). The day’s football kicks off with a friendly in Beijing between Brazil and Zambia, where both Alves and Neymar, starters in the 0-2 win over South Korea, again look likely to get some game time.