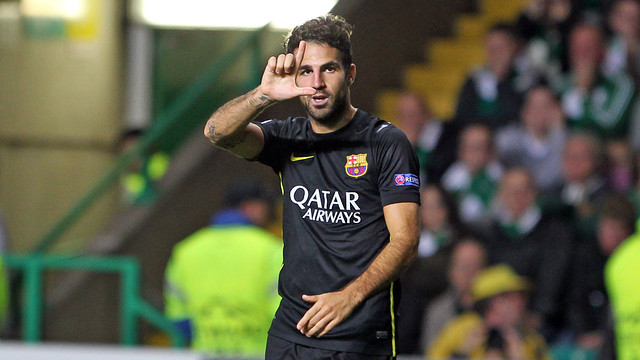 Alves: “Each day we try to be more complete. If we continue down this path, our chances [of winning] increase”

Cesc’s header after a fantastic play between Neymar and Alexis gave Barça the three points in Glasgow this evening. The midfielder talked about this Tuesday’s victory on the pitch of Celtic Park after the match: “We knew that it would cost us because they defend well and they need very little to generate chances. We played a good match.” He added: “It was one of the most complete games of the season and the victory is totally deserved.” Cesc concluded by saying, “it’s a pleasure to come here and play in this atmosphere and against a great team.”

Here are some of the statements made by the Barça players after the match:

“Last year they beat us by playing this way and we knew that they would try to do the same thing. This time we moved the ball quickly, we played long balls when they were necessary and, in the second half, the goal gave us a bit of tranquility.”

“We controlled the game well for most of the match. They only had one clear chance which was perfectly saved by Valdés and a couple of dangerous corners. If it isn’t our most complete game, it’s one of them.”

“I believe that we had a lot of possession and we dominated the match. We only scored once but we could have scored more.”

“Neymar and Bartra are showing their quality. They will be important throughout the whole season and today they proved it.”

“Each day we try to be more complete. If we continue down this path, our chances [of winning] increase.”

“We try our best so that absences like Messi’s or Marcherano’s aren’t noticeable when we play.”

“It was an important victory. I’m happy to have collaborated in the play leading up to the goal. I’m adapting more to the team’s dynamic each day.”