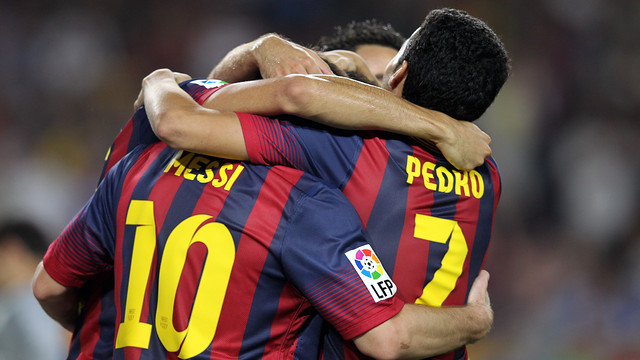 Starting this Saturday, Barça will face Osasuna, Milan, Real Madrid, Celta and Espanyol in the space of just 14 days.

Once the international break is done and over, Barça face a gruelling five games in the space of just 14 days, with what could prove to be key games in both La Liga and the Champions League against  Osasuna,  AC Milan, Real Madrid, Celta and Espanyol.

The run of games begins with two tough trips – starting with Pamplona to face Osasuna on Saturday 19th (20.00 kick off) in round 9 of La Liga and then, here days later, the visit to Milan in the Champions League. Milan are second behind Barça in Group H and a win for Martino’s men would virtually ensure progress to the next round as the group stage reaches the halfway point.

Straight after the Milan game, attention will switch to the Big One – with Real Madrid due at the Camp Nou at 18.00 on Saturday 26th for the first meeting between the two this season, and the first time Tata Martino and Carlo Ancelotti have experienced El Clasico.  Just 72 hours later, the team will line up against Celta in Balaidos – a special game for many of the players , as they will be up against a squad containing ex- Barça players Fontàs i Nolito and on loan Rafinha and also coached by Club legend Luis Enrique.

The games keep coming, with Tato Martino’s first city derby against Espanyol set for the following Friday – November 1st (21.00) – at the Camp Nou.

The players then have a well deserved five day gap before their next match – the return game against Milan at the Camp Nou (Wednesday 6, 20.45) before Betis come to the Stadium in the last game before November’s international break.