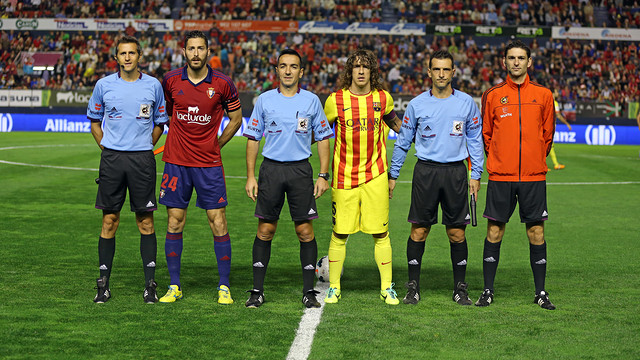 After Atlético Madrid lost at Espanyol, Barça are now ahead of them on points with 25

The draw at El Sadar (0-0) combined with Atlético Madrid’s loss at Cornellà–El Prat (1-0) leaves Barça top of the table with 25 points, one more that Atético and three more than Real Madrid, who come to the Camp Nou next week.

Here are some more facts associated to last night’s action:

– Barça have led La liga for 36 weeks and are seven short of the all-time record.

– Barça have kept eight clean sheets in 13 of the official games played this term.

– Not since January 28, 2011, away to Villarreal, have Barça failed to score in a league match. That’s goals in 64 consecutive matches.

– Puyol finally returned at centre back. The last time he started a game was at home to Deportivo in the 27th match of the 2012/13 season.

– Carles Puyol and Marc Bartra had never played together in the middle of defence until yesterday at El Sadar.

– Puyol played 90 minutes in his first game back. He made 68 good passes, a success rate of 99%, cleared nine balls, recovered 13 and made no fouls while receiving two.

– Montoya started his second game of the season. The other one was the 4-0 win at Rayo.

– This was the fourth start in a row for Cesc Fàbregas and Marc Bartra.

– The top passer Osasuna against was Andrés Iniesta, who made 125, and 108 of them were completed.