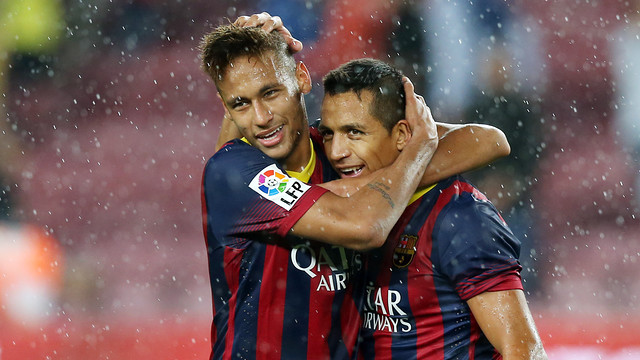 With two goals and an assist, the Chilean was outstanding against Valladolid

– Sixth brace for Alexis in an FC Barcelona shirt. He also got two against Rayo, Bayern, Getafe, Cordoba and Mallorca.

– The Chilean not only scored two, but also gave one assist and shot four times, three times on target.

– Barça have extended the all-time record set last week against Almeria and have now started La Liga with eight wins in a row.

– Barça need just one more win to equal the all-time record start of nine wins by Real Madrid in 1968/69.

– Barça have scored at least once in their last 64 league matches.

– Gerardo ‘Tata’ Martino is the first manager to ever win his first eight league games. It is also his best ever winning streak as a manager.

– Every time a team has won their first eight games, they have gone on to win the title, as was the case with Real Madrid in 1962, 1969 and 1988. But of course, this season there are two clubs with a perfect 8-0-0 start after Atlético Madrid defeated Celta 2-1 on Sunday.

– Barça’s came from behind to win for the first time under Tata Martino. Barça had won 10 of the 12 games played in all competitions so far, and the only time they ever went behind was in the first leg of the Supercup against Atlético Madrid, when Villa opened the scoring in a game that ultimately finished 1-1, with Neymar grabbing the equaliser.

– Barça have won 19 consecutive league games at the Camp Nou. The last time they failed to win was the draw with Real Madrid in October 2012.

– FC Barcelona is the side with the most wins against Valladolid (54) and also the most goals (193), in the 83 meetings between the teams.

– Xavi scored his second goal of the season against Valladolid. He also scored against Levante and his all-time tally for Barcelona is now 81.