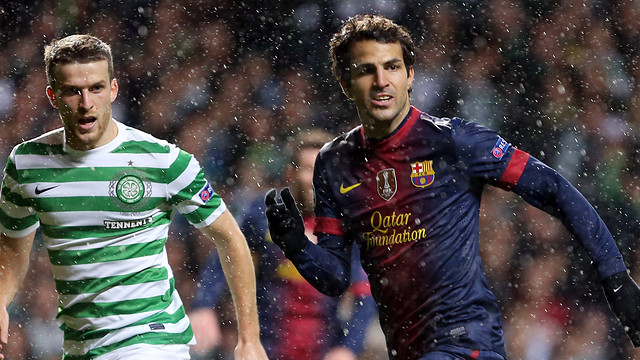 Ahead of tonight’s Champions League game in Glasgow, we take a look at some of the facts and figures surrounding tonight’s game

• This will be Barça’s fifth game at Celtic Park, with two wins and two defeats so far – 11 goals scored and 8 conceded.

• Celtic Park is, in fact, the only Scottish ground Barça have recorded a win at, having lost 1-0 to  Dundee United in the 1986/87 UEFA Cup and been held to a goalless draw at Ibrox against Rangers in the 2007/08 Champions League.

• Three of Barça’s starting eleven from a year ago at Celtic Park will miss the game this time round, with Mascherano, Alba and Messi all out injured.

• Celtic have won seven out of their last nine European games at  Celtic Park, with their only defeat coming last year against Juventus (0-3).

• Steven Mouyokolo was one of Celtic’s big summer signings, but an Aquilles Tendon injury has ruled him out of the Group stages.

• Celtic are second in the Scottish Premiership after seven games, tied on 19 points with Inverness Caledonian Thistle FC, who have played one more game.

• No Barça players are taking a yellow into the game, after the team received no booking sin the 4-0 win over Ajax.

• The game will be refereed by the French official Stéphane Lannoy. This will be his third game in charge of a Barça match, following the 3-1 win against Stuttgart in the 2007/08 competition and the 2-0 victory over Copenhagen in the  2010/11 season. Lannoy has never before taken charge of a Celtic game.