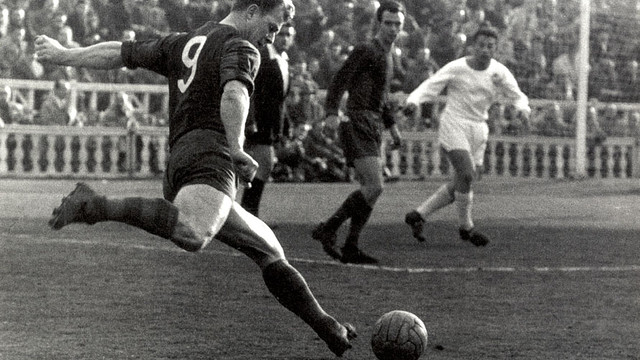 The Hungarian’s first match for Barça was a friendly against Osasuna played on October 12 of 1950 in FC Barcelona’s Les Corts stadium. FC Barcelona won the game 4 to 0

One of the best players to ever play the sport and hero to Barça fans in the 1950s, Ladislao Kubala was born in Budapest, Hungary, on June 10 in 1927. In 1948 he fled his home country and settled in Rome, Italy. He signed for the Italian team Pro Patria, but he only featured in a couple of non-official matches in the 1948/49 season. Unfortunately, a FIFA sanction, requested by the Hungarian Football Federation, banned Kubala from playing any official matches with his Italian club. Given the situation, and with the aid of other refugee players from the Eastern Bloc, Kubala formed his own team, and went on tour throughout Western Europe. When he arrived in Spain, the Technical Secretary for FC Barcelona, Josep Samitier, was thoroughly impressed with Kubala, a player that had it all: extraordinary physical strength, technically talented, excellent vision of the game and a tremendous ability to score goals. ‘Sami’ didn’t rest until he convinced Kubala to sign for FC Barcelona. That was on July 15 in 1950.