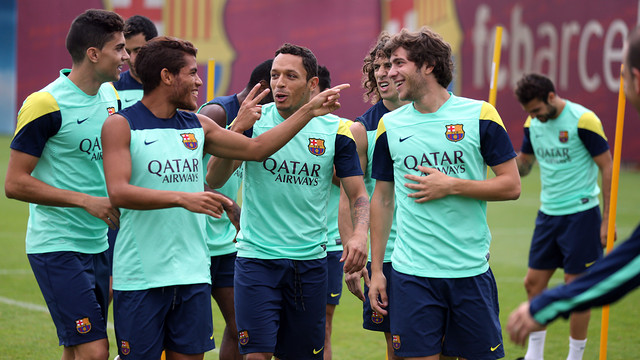 Tata Martino has picked the same players that went to Glasgow, except Oier, Sergi Gómez and Patric, who miss out

The Barça coaching staff have announced the names of the 18 players that will face Valladolid at the Camp Nou on Saturday. They are the following: Valdés, Pinto, Montoya, Piqué, Fàbregas, Xavi, Pedro, Iniesta, Alexis, Neymar, Dos Santos, Bartra, Sergio, Song, Tello, Adriano, Dani Alves and Sergi Roberto. Apart from the missing Oier, Sergi Gómez and Patric, these are the same players that travelled to Glasgow midweek

Puyol with the squad

Puyol was once again able to train normally in this morning’s session at the Ciutat Esportiva Joan Gamper. Barça will train one more time behind closed doors on Saturday morning, and will then rest in a hotel. The clash with Valladolid kicks off at 22.00.