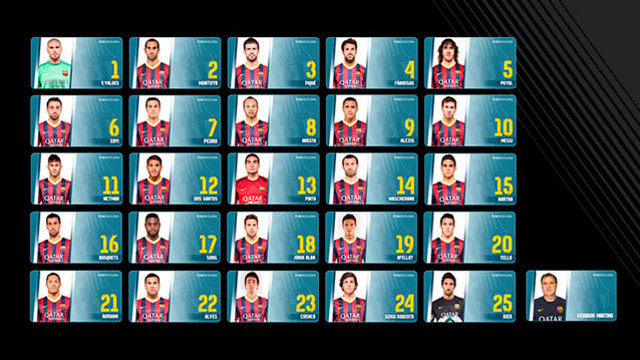 After the FC Barcelona coaching staff and directors for sport confirmed on Monday that Afellay and Cuenca will be getting shirt numbers this season, 19 and 23 respectively, we now know for sure what numbers each of the 25 first team players will be wearing in the 2013/14 season.

Valdés, Piqué, Cesc, Puyol, Xavi, Iniesta, Alexis, Messi, Dos Santos, Pinto, Mascherano, Bartra, Sergio, Alba and Adriano all keep the same numbers as last year. The three new arrivals, Neymar, Sergi Roberto and Oier, will be wearing 11, 24 and 25, respectively. The others have decided to change their number. Alves is taking the 22 that Abidal formerly wore, Montoya takes Alves’ old number 2, Pedro has taken Villa’s old number 7, Song now has 17 instead of 25, and Tello has switched from 37 to 20.