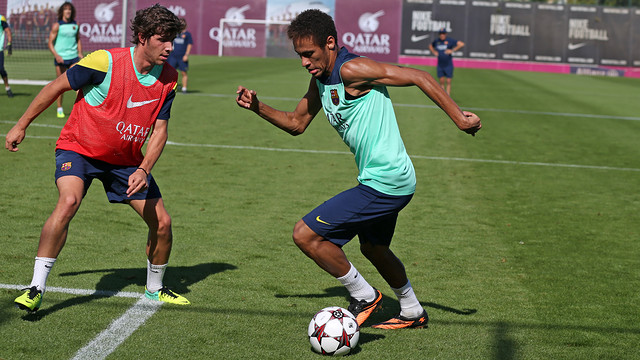 Puyol trained with the group while Isaac Cuenca exercised separately

Tata Martino will announce his squad for the Celtic game this evening after the final whistle of the Barça B match, as he intends to include one or two reserves in his squad.

The players will wear the new, all black third kit  for the first time this season against Celtic.

On Sunday morning, training was a two-speed affair with Saturday’s team concentrated on recovery work while the rest of the Barça squad trained at a higher pace with the focus very much on Tuesday’s Champions League visit to Celtic.

Tata Martino will unveil his squad list later this evening after the Barça B match against Mallorca.  The manager has 19 first team players available to him but intends to add one or two players from the reserves.

The team will leave for Glasgow on Monday morning and train that afternoon in Celtic Park (7 pm, local time).  Before training, Tata Martino and Cesc Fàbregas will give press conferences (6.15 h, local time).