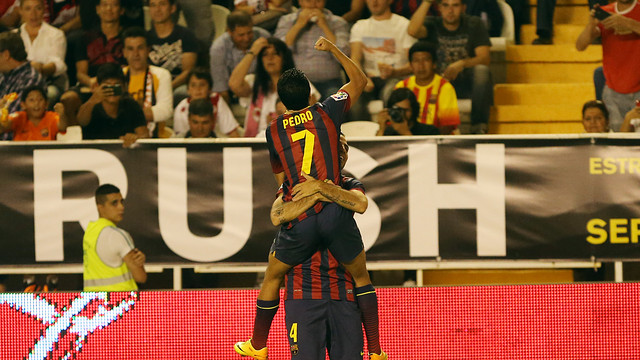 After scoring 10 braves, the player scored his first hat-trick in the Blaugrana strip on Sunday (away to Rayo)

Swapping the No17 for the No7 was a good move for Pedro Rodríguez. His start to the season has been spectacular as he’s netter five goals from seven matches. In addition, this Saturday, away to Rayo, he scored his first hat-trick in the Blaugrana strip.

Half of his tally from last year

Never before has Pedro scored as many goals in the opening seven matches of a season. This year, the forward, who is fighting for a place in the starting line-up with Alexis and Tello, is back to his goalscoring form. He netted twice against Levante and three against Rayo. To put that into perspective, these five goals are half the amount of goals he scored last season; he’s currently on track to hit the same amount of goals he scored in the 2009/10 season (23 goals) and the 2010/11 season (22).

His hat-trick in Vallecas was his first for Barça, but Pedro has already scored a total of 10 braces in the Blaugrana strip: six in the league (4-2 against Mallorca, 1-5 against Espanyol, 2-1 against Levante, 0-7 against Rayo, 4-0 against Espanyol and 7-0 against Levante), two in the Champions League (0-3 against Panathinaikos and 4-0 against BATE Borisov) and two in the Cup (0-2 against Cultural Leonesa and 0-3 in the final against Athletic Club).