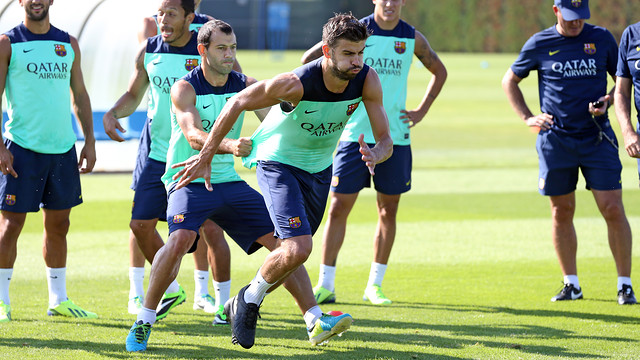 Dani Alves not to play for Brazil

Barça full back Dani Alves will finally not be playing for Brazil this week after sustaining tendinitis in his right ankle. He was due to appear in two friendlies, against Australia on Saturday in Brasília, and Portugal on Tuesday in Boston.

The players have had a two-day break since winning in Valencia to continue their one hundred per cent record this season, while eleven internationals are off representing their countries. Nine players exercised today under Jorge Pautasso, who for the first session of this unusual week replaced Gerardo ‘Tata’ Martino. The manager has returned to Argentina to sort out a few outstanding personal issues.

It all meant that Pinto, Oier, Piqué, Mascherano, Dos Santos, Tello, Montoya, Bartra and Adriano were the only first team members present on Wednesday morning.

Carles Puyol continued with his recovery programme following his operation at the start of the summer, while Sergio Busquets did physiotherapy on the thigh injury sustained against Valencia and that has prevented him from travelling to join the Spain squad.

The players will train again at the Ciutat Esportiva Joan Gamper on Thursday at 10.00 am.