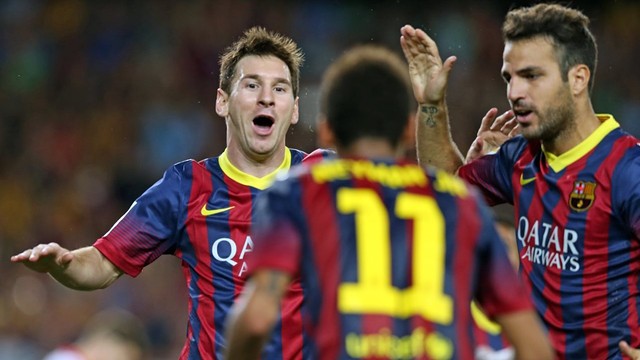 The Argentinian is top scorer in La Liga, and has now scored 16 goals in 16 games against sides managed by Unai Emery

We take a look back at some of the trivia produced by the Barça v Sevilla game on Saturday night, starting with yet more achievements for Leo Messi:

– Messi is top scorer in the league with six goals in three games. He got two against Levante, three against Valencia and one more last night against Sevilla.

– The Argentinian has now scored 16 goals in 16 games against sides managed by Unai Emery.

– Neymar has supplied two assists in the league, both for Messi.

– Alves scored the first header for Barça this season. It is four years since the Brazilian last scored with his head – against Malaga on March 22, 2009.

– It is two years since Barça last scored a league goal involving two defenders. Dani Alves was also involved in the last example, when he and Bartra produced the goods.

– Barça is only the second team to ever win the first four games in two consecutive leagues. Real Madrid also did this in 1961 and 1962.