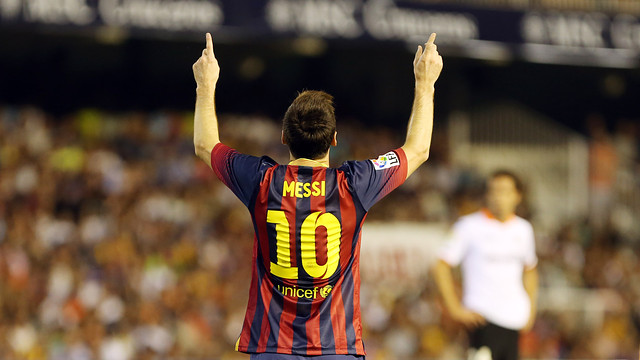 Leo Messi scored his 23rd hat trick for Barça in the league this Sunday and he’s now the leading scorer in La Liga, after only featuring in two matches

Barça’s No10 terrorised Mestalla once again, a stadium that’s hosted six of the Argentine’s goals in La Liga. This Sunday Leo Messi scored three and took his hat-trick tally up to 23 as a Barça player (he’s scored 26 hat tricks as a professional footballer, the remaining three are for Argentina). He also emulated the hat trick scored by Romario in 1993, when the Brazilian scored three goals in the first half.

With this Sunday’s three goals away to Valencia and his two scored in the first round of La Liga at the Camp Nou against Levante, Messi is now the highest goalscorer of Primera (5). Keep in mind that Messi missed Barça’s second league match due to injury. Messi surpassed Quini as Barça’s fifth highest scorer in the competition (220 goals) and he’s only one away from beating César.