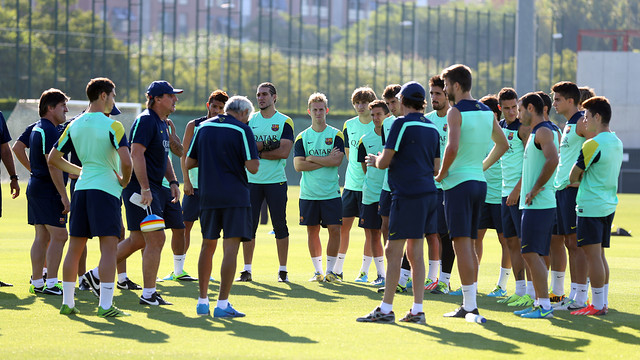 Today’s session was taken by Jorge Pautasso, with many of the players away on international duty

No fewer than ten players from Barça B trained today at the Ciutat Esportiva Joan Gamper along with the nine available first team players. Like on Wednesday, the session was overseen by assistant coach Jorge Pautasso.

Pautasso was once again covering for Tata Martino who has taken advantage of the international break, during which eleven first team regulars are absent, to return to Argentina and sort out pending personal issues.

Carles Puyol and Sergio Busquets continued with their specific programmes. The captain combined work on the pitch with a workout in the gym as he recovers from his knee injury. Meanwhile, Busquets did physiotherapy on the thigh injury sustained at Mestalla and that has prevented him from playing for Spain.

The final training session of the week will be tomorrow Friday at 10.00 in the Ciutat Esportiva Joan Gamper.