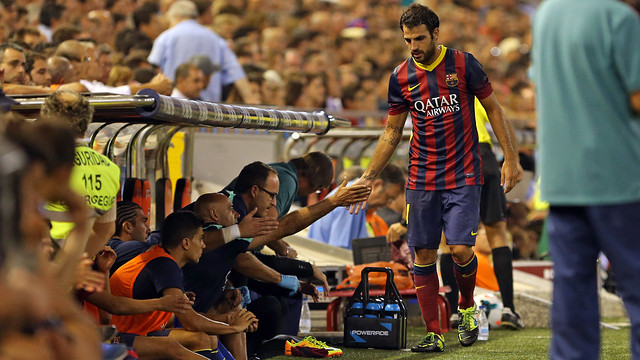 The Barça mifidler has started the new season in stunning form, playing in both midfield and attack

He has provided five assists in the league, half the number he supplied all last season

Cesc Fàbregas has been one of the stars of the first five official matches this season. He has started four of those games, against Levante, Malaga and Valencia in La Liga and in the second leg of the Spanish Supercup against Atletico Madrid. It was at the Vicente Calderón that he played as the ‘false centre forward’, the position where Leo Messi usually plays. That night, Cesc came on for the injured Argentinian, and then played in the same role in the league match away to Malaga.

In the other three games, he played in midfield. Against Levante and Atletico Madrid, he lined up alongside Xavi and Sergio, and in Valencia, his partners were Sergio and Iniesta. Cesc, after already performing well in the preseason, gained Martino’s confidence with his goal assists. He already has five in La Liga, which is already half of his tally for the whole of last season. He got three in the drubbing of Levante, and another two last Sunday at Mestalla. After such a magnificent start to the campaign, all he has to do now is open his goalscoring account.