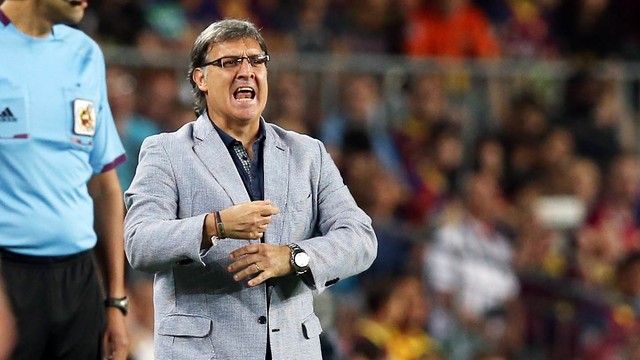 “Song and Montoya played very well, they are at a good level despite the fact that they don’t get a lot of playing time”

After the 0-4 victory in Vallecas against Rayo Vallecano, Gerardo Martino talked to the press about the match. “Rayo pressed us and they made it difficult to play short passes. We had the alternative to play long and at times you have to do this in these types of matches in order reach other parts of the field,” explained Martino, who went on to say that he is satisfied with how his men played.

“I really liked the team in the second half. We didn’t have defensive errors and like the match against Ajax, we improved over the course of the match. We have the capacity to score a lot of goals,” said the Argentine, who added: “Valdés is playing at a fantastic level and all I can do is enjoy it as his manager. He had decisive saves and he saved a penalty.”

“Alex Song and Martín Montoya played very well. They are at a good level despite the fact that they don’t get a lot of playing time,” said Martino, who went on to talk about how Rayo approached the match: “Rayo’s approach was very bold. Aggressive. They had an excellent approach, but we played better in the second half.”

Finally, Martino highlighted Neymar’s performance. “Neymar is very intelligent and he reads the in-game situations well. He could have scored and he also gave a goal to Pedro. He’s scored one of the most important goals so far this season [the goal against Atlético Madrid in the Spanish Super Cup].”