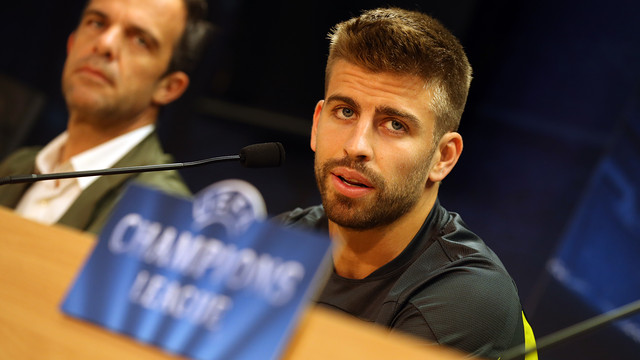 He added that “we’ll try to do well. Barça will be fighting to win the Champions League”

The Camp Nou is the venue on Wednesday night for FC Barcelona’s first game of their Champions League campaign. Gerard Piqué, who has already won the title three times, once with Man United and twice at FCB, said today that “the team are looking forward to starting this competition because it’s the most prestigious. There are some great teams in Europe but we’ll be hoping to do well. Barça will be fighting to win it and it’s essential that we get off on the right foot.”

He went on to say that “there’s no negotiating our style of play. This way of playing has done us good, but in the last two or three seasons teams have worked out what we do. We have to come up with variants and different ways of attacking. It’s the only way we know how to play. We don’t know how to defend a scoreline. When you’re out on the pitch, these things are difficult. We could do things better, but at the end of the day we have won all four league games and the Spanish Supercup … Under Tata Martino we’re learning new ideas. We need to find the right balance and know when we need to be more direct and when we should play the way we always have done”.

Piqué was asked about his fitness, and replied that “I’m feeling okay, but more is always asked of people playing in defence. In some parts of the game we never stop running up and down the pitch. But I’m feeling fit”.

Piqué then compared the relative importance of the Champions League and the domestic title. He commented that “it’s the Liga that dictates the way you’re playing, and whether you have got things right or not. Last season, Bayern Munich were much better than us. We have to face the facts. But we had a great season, winning the league with 15 points more than Madrid and getting 100 points.”

Carles Puyol trained today and looks like he could be returning to active duty very shortly. Said Piqué, “there is still some recovering for Puyol to do. He’s still getting back into his game but when he’s fit again, Tata will be using him more. A team always needs its captain. He’s a great professional and a very good friend of mine. The team has managed to get by without him for months, but with him in the side we’re always that little bit better.”