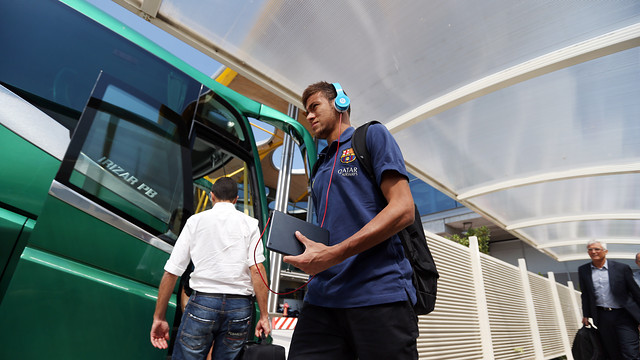 The 19 players called up for the game in Vallecas arrived in Madrid this morning, where boss Tata Martino was waiting for them in the team hotel.

FC Barcelona arrived in Madrid this morning ahead of this evening’s game against  Rayo Vallecano for the fifth game of the league season, 20 days after their last trip to Valencia. The 19 players called up, as well as the coaching staff landed at Barajas airport at 11.30 this morning.

Club vice-president Jordi Cardoner and board members Jordi Moix and Pilar Guinovart, as well as Director of Football  Andoni Zubizarreta accompanied the squad to Madrid.

Tata Martino meets up with the players in Madrid

Tata Martino, who flew out to Argentina after the Ajax game for his father’s funeral, was waiting for the players in Madrid at the team hotel, where they will be staying until a few hours before kick off.