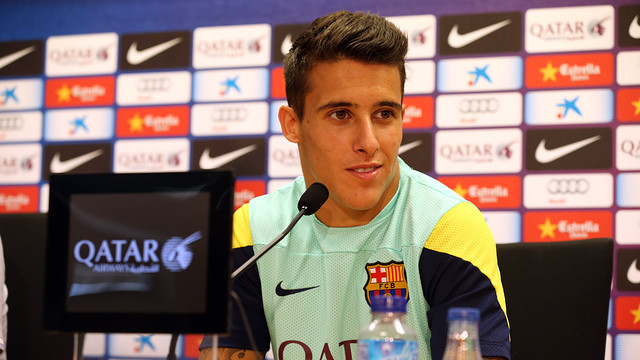 Tello explained he was feeling”comfortable and hungry ” after his debut this season on Saturday.

“The Champions League is really important for us and the best way to go into the game against Ajax is with a league win behind us”.

Cristian Tello, who made his first start of the season on Saturday night, spoke to the press after training this lunchtime and with one eye on Wednesday’s Champions League opener against Ajax, explained: “The Champions League is really important for us and the best way to go into the game against Ajax is with a league win behind us”.

The Catalan winger played for 62 minutes on Saturday and explained that his relationship with coach Gerardo Martino is: ” good – he’s easy to talk to and is very approachable. He asked me to stay alert, work hard and my chances would come.  We are doing okay, but gradually we will improve – we need to change a few things so that we aren’t too predictable, but in essence we have to stay the same”.

Tough games ahead in the league

“People look at the league from outside and see just two or three teams competing, but it’s very hard to keep taking the points, other teams know how to play against us and they have studied how we play a lot. Every game will be tough” Tello also commented on his own performance on Saturday night: “it was a very intense game. I felt comfortable in the first half. I’m going into this season hungry to play and hoping to get plenty of game time. Alexis, Pedro, Neymar and I are all fighting for a place in the starting eleven. We’ve got the best players in the world up front and you have work very hard”.